Weighing in on Evolution

Posted by Yonason Goldson in Culture, Science and Nature on January 19, 2012

Teaching Jewish history and philosophy, I try to encapsulate for my students what I have heard and read from critics of evolutionary theory.   My purpose is not to disprove evolution per se, but to demonstrate that the theory of evolution is not as sacrosanct as the scientific community and conventional wisdom would have us believe.  Since I am not a scientist, I have to  sift though what evidence is available in layman’s terms and try to evaluate the often strident voices on each side of the argument.

Having recently revisited the issue, I remain confidant in my conclusion that evolution may have guided the formation of life, but that it could not have done so without divine guidance.  Despite the vehemence of those who reject Creationism or Intelligent Design, it seems to require a massive leap of faith to conclude that life could have developed into its present form without help from outside the world of nature.  Below I provide relevant quotes and links, which I hope interested and thoughtful readers will give the attention they deserve.  Civil rebuttals from articulate spokesmen are welcome. 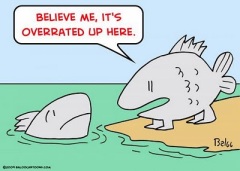 “Among the structures that appeared in the Cambrian were limbs, claws, eyes with optically perfect lenses, intestines. These exploded into being with no underlying hint in the fossil record that they were coming. Below them in the rock strata (i.e., older than them) are fossils of one-celled bacteria, algae, protozoans, and clumps known as the essentially structureless Ediacaran fossils of uncertain identity. How such complexities could form suddenly by random processes is an unanswered question. It is no wonder that Darwin himself, at seven locations in The Origin of Species, urged the reader to ignore the fossil record if he or she wanted to believe his theory. Abrupt morphological changes are contrary to Darwin’s oft repeated statement that nature does not make jumps. Darwin based his theory on animal husbandry rather than fossils. If in a few generations of selective breeding a farmer could produce a robust sheep from a skinny one, then, Darwin reasoned, in a few million or billion generations a sponge might evolve into an ape. The fossil record did not then nor does it now support this theory…

“The abrupt appearance in the fossil record of new species is so common that the journal Science, the bastion of pure scientific thinking, featured the title, “Did Darwin get it all right?” And answered the question: no. The appearance of wings is a classic example. There is no hint in the fossil record that wings are about to come into existence. And they do, fully formed.”

“As I began to write this novel, I found myself returning unexpectedly to the concerns of my undergraduate studies thirty years ago. Back then, evolution was so controversial that one quickly learned to write cautiously, justifying even the mildest statement with scholarly footnotes. If anything, evolution is more controversial today. And in its modern formulations, evolutionary theory is forbiddingly difficult, and frequently counter-intuitive…
“I remain convinced that the world we are born into is a world of controversy, and that it behooves us to respect our adversaries, and to honor them as expressing another aspect of God’s will.
“Because in the end, evolution is a profound mystery. Life is a profound mystery. And we are fools if we forget that and think, even for a moment, that we know it all…

“Life as we know it is, among other things, dependent on at least 2000 different enzymes. How could the blind forces of the primal sea manage to put together the correct chemical elements to build enzymes?  The chance that higher life forms might have emerged in this way is comparable with the chance that a tornado sweeping through a junk-yard might assemble a Boeing 747 from the materials therein… I am at a loss to understand biologists’ widespread compulsion to deny what seems to me to be obvious.”

Sir Fred Hoyle (who estimated the odds of spontaneous generation as equivalent to rolling 50,000 consecutive sixes with a single die)

“Consequently, discussion often turns to vague and murky assertion. Starlings are said to have evolved to be the color of dirt so that hawks can’t see them to eat them. This is plausible. But guacamayos and cockatoos are gaudy enough to be seen from low-earth orbit. Is there a contradiction here? No, say evolutionists. Guacamayos are gaudy so they can find each other to mate. Always there is the pat explanation. But starlings seem to mate with great success, though invisible. If you have heard a guacamayo shriek, you can hardly doubt that another one could easily find it. Enthusiasts of evolution then told me that guacamayos were at the top of their food chain, and didn’t have predators. Or else that the predators were colorblind. On and on it goes. But…is any of this established?”

I have some doubts about including the following article, having no indication of the credibility of the author.  Nevertheless, he cites many compelling sources which, independent of his own expertise or lack thereof, are worth considering:

“Harmful mutations happen constantly.  Without repair mechanisms, life would be very short indeed and might not even get started because mutations often lead to disease, deformity, or death.  So even the earliest, “simple” creatures in the evolutionist’s primeval soup or tree of life would have needed a sophisticated repair system.  But the mechanisms not only remove harmful mutations from DNA, they would also remove mutations that evolutionists believe build new parts.  The evolutionist is stuck with imagining the evolution of mechanisms that prevent evolution, all the way back to the very origin of life.”

“However, on both theoretical and experimental grounds, the broad sweep of evolution cannot be based on random mutations. On theoretical grounds, the probability is just too small for random mutations, even with the filtering of natural selections, to lead to a new species.
“On experimental grounds, there are no known random mutations that have added any genetic information to the organism. This may seem surprising at first, but a list of the best examples of mutations offered by evolutionists shows that each of them loses genetic information rather than gains it.
“One of the examples where information is lost is the one often trotted out by evolutionists nowadays in an attempt to convince the public of the truth of evolution. That is the evolution of bacterial resistance to antibiotics.
“Clearly, if random mutations could account for the evolution of life, then those mutations must have added a vast amount of information to the genetic code. From the time of the first simple organism until the present profusion of life, billions of genetic changes would have to be built up by a long series of accumulated mutations and natural selection. It follows that each of these many billions of mutations must have added information. Yet in spite of all the molecular studies that have been done on mutations, not a single one has been found that adds any genetic information! They all lose information!”

One of my favorite natural anomalies is the orb spider, which spins a web solely for the benefit of the wasp larvae that have been injected into it.  This must have taken a good few million years to happen by accident.