The Slow Road to Sanctity

Posted by Yonason Goldson in Philosophy, Weekly Parsha on January 22, 2014

You shall not ascend my altar by steps, so that you will not reveal your nakedness upon it.  And these are the statutes that you [Moses] shall place before them [the Jewish people]

During the early days of the Second Temple era, the sages divided the Torah into portions, or parshios, to be read on successive Sabbaths.  The juxtaposition of any two of these parshios always alludes to some principle in Jewish thought.  In the case of this week’s Torah portion, however, the connection with the end of last week’s parsha seems particularly elusive. 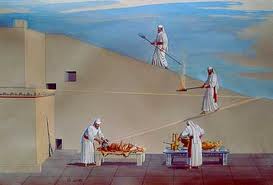 After the drama of the Almighty’s revelation at Sinai and the giving of the Torah, the narrative switches to a rather dry and technical description of the altar in the Tabernacle.  Not by stairs should the kohain go up, lest the gaping of his robes expose his private regions to the stones upon which he walks; rather, he should ascend by a ramp, so that his shorter, more even steps will not result in any impropriety.

Immediately afterward, the Torah introduces the mishpatim, the statutes that govern civil law by establishing the legal parameters of business dealings, private property, loans, and damages.  Superficially, no two subjects within Torah could be more distant from one another.

The revered Chassidic Master, Reb Elimelech of Lizensk, offers a tantalizing explanation.  As we go through life, we should see ourselves as kohanim, the priests of the Almighty, engaged in a perpetual quest to ascend spiritually, approaching ever nearer to a more perfect service upon the conceptual altar of the Creator.  Every attainment of a new spiritual level is called by the kabbalists a madrega — a “step” onward and upward.  The Jew is not meant to remain static, but to pursue ever more challenging goals in pursuit of spiritual perfection.

The danger, however, is that we may try to take too much upon ourselves, that we attempt to move forward by unrealistic leaps, that we may seek inspiration in the mystical and ethereal at the expense of more fundamental forms of heavenly service.  By reaching for the stars, we may find ourselves without firm footing beneath us, leaving ourselves vulnerable to the indictments of the divine attribute of Justice.  By artificially propelling ourselves to a level that we cannot realistically sustain, we may cause ourselves to be judged with a strictness that is beyond our capacity to endure.

The ramp up to the altar, therefore, serves as a symbol of the measured, determined consistency with which we should approach our commitment to spiritual growth.  HaShem may bless us at times with great leaps forward and moments of dazzling inspiration, but spiritual development is often like physical development — painfully slow and paradoxically mundane.

This, teaches Reb Elimelech, is the connection between the details of the altar and the words that introduce this week’s portion, “And these are the statutes…”  If we look for spiritual excitement only in arcane mysteries and secrets, we will inevitably miss the most essential opportunities for spiritual growth that our daily routine provides.  The concern for others, for their money and their time and their property, the respect for boundaries both personal and legal — these are the sensitivities that most effectively and meaningfully transform us into spiritual beings.  If we think we can overlook them in our quest for personal revelation and divine intimacy, we will have no foundation upon which to stand.  If we carefully cultivate them, we will awaken within ourselves the spiritual vision that will enable us to recognize the presence of the Almighty in every aspect of our lives.